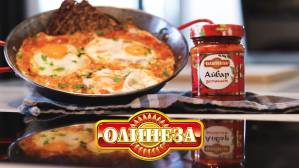 Shakshuka is an Arabic dish, better known as "Eggs in Arabic". You can try shakshuka in different variants in Israel, Tunisia, as well as in the nations of the Mediterranean.

We offer you a version of Shakshuka with Aivar Olinesa. For the moments when you don't have much time and you are wondering what to cook. The popular Arabic dish is prepared mainly for breakfast in the Orient, but you can prepare it for lunch or dinner. Here's how to actually prepare it.

To prepare this dish you will need:

• a pinch of black pepper

Finely chopped garlic and onion fry in olive oil for 2-3 minutes, until golden. Add the diced tomatoes, salt and pepper. Add Olinesa tomato paste, followed gradually by Olinesa Ajvar. Cook for 3-5 minutes on low heat. Spread the eggs on the mixture directly in the bowl in which it is cooked and leave it on the stove until the whites turn white. Garnish with fresh green spices if desired.